Ideas of liberty and decentralization started coming into shape during the early 19th century. First heralded by French historian Tocqueville in response to events unfolding after the revolution, it became quickly adopted and subsequently promoted by the first self-proclaimed anarchist, Pierre-Joseph Proudhon.

Since then, the idea of decentralization has come a long way, becoming the foundation for one of the 21st century most disruptive technologies, blockchain technology, among many other applications.

Before jumping into modern day applications of decentralization let’s start with something more fundamental — collaborative groups. To better understand these groups, we’ll look at animals.

Bees live in collaborative groups, as is also common with other animal species such as canines. There are many variations to this type of group, take colonies and packs as an example. Bees, however, work within a collaborative group known as HYVE.

To make a clear distinction — in a pack, the leader of the group, also known as the alpha, leads the other members of the pack, essentially giving out directives. In a HYVE, the situation is rather different, because the alpha’s (queen) only purpose is to reproduce, and not act as a centralized authority handing out instructions.

HYVEs are built from the base up as decentralized organizations; no bee gives out directives to any other bee. Every member gets assigned a specific role (queen, worker or drone) and works together in a distributed peer-to-peer fashion, thus establishing a system that maintains the collective.

When moving on to human organizations, the prevalence of hierarchies trumps distributed peer-to-peer systems by a large margin. This can be attributed to increased task complexity and to a general lackadaisical approach in finding substitutes or more suitable variations.

The problem with a hierarchical system is the long-lasting impacts an individuals subjectivity can have on the organization. If non-skilled individuals rank highly in the organizational scheme, then it is more probable for a flawed process to appear in the system. The US did a computer simulation on that — didn’t turn out too well. The individual ended up ranking higher than anyone expected though and tried to build a wall in an attempt to break the simulation.

Within a hierarchy, as you go down the organizational structure, there is an inherent imposed reliance on the upper echelons of the organization. The ever-increasing reliance kills self-governance and autonomy. Thus, the system becomes less efficient and prone to failure. A hierarchy, by design, relies on a single point at its fundamental level, and that becomes its point of failure. Moreover, as the organization expands, the level of reliance and risk only increases.

A different approach to hierarchical structures

Holarchy is commonly referred to as a form of hierarchy; however, hierarchy, by its definition, has both an absolute top and bottom.

This is not logically possible in a holon, as it is both a whole and a part. The “hierarchical relationship” between holons at different levels can just as meaningfully be described with terms like “in and out”, as they can with “up and down” or “left and right”; perhaps more generally, one can say that holons at one level are “made up of, or make up” the holons or parts of another level.

An example of a holarchic relationship is that between particles, atoms and molecules, where each holon is a “level” of organization, and all are ultimately descriptive of the same set.

The current state of Organizations

Most for-profit organizations of the 21st centuries have become or are striving to become corporations, in other words, centralized hierarchical organizations.

The global employment-to-population rate stood 60%-70% in 2013, meaning the vast majority of people on earth are working in a similar organization. The problem, however, lies not in people being employed by one such organization, rather it lies in the fragility on which these structures are built.

Centralized structures can very easily crumble, as has happened countless times in every economic bubble we’ve experienced. While decentralized structures also suffer when hit with the same effects, there is no single point of failure, thus making the disappearance of said structure unlikely if not impossible. Decentralized organizations are by design “stress-resistant” to economic and societal paradigm shifts.

The easiest way of escaping the traditional corporation path is to become a freelancer. While this has definitely started becoming a trend in recent years with over 50M Americans doing one or more freelance jobs in 2017, it still has a long way to reach maturity and global adoption.

Freelance became the go-to solution for many people because it offered previously non-existent liberties. Choosing when and on what to work on, and much higher flexibility in changing careers, if needed.

As with any good thing, however, freelancing has some less pleasant facets as well, with the biggest one being the fact that freelancing is currently done through completely centralized platforms. Quite the irony we have there. While these platforms give freelancers more freedom than they’d traditionally have as employees when a conflict arises it gets judged by a member of the organization. As a result, freelancers are met with the same subjectivity they were trying to get rid of. It has a different packaging though, we have to give them that. Below is one of the many stories from the Upwork series.

Cases like this are not only often occurrences, but they are also some of the more light incidents. There are also numerous stories of freelancers not getting paid for their work, even though the work was completed. The judges, in this case, are part of the same centralized structure and even leaving aside human subjectivity, there is a clear conflict of interest. The judge’s interest is to be well and for him to be well the company has to be well. After all, the judge is, first of all, an employee with a family and bills to pay. Now let’s assume the company has a contradictory interest to a user and the judge has to take a decision. John Nash could argue that by following his self-interest the judge would be following the best interest of the whole group, and while John might’ve been a bit of an odd character, he was very rarely wrong.

HYVE is a decentralized ecosystem that by leveraging decentralized technologies solves the current problems of the global workforce market.

The result is a community-governed system which brings down costs, offers wider flexibility, cuts out the middleman, welcomes the unbanked, provides transparency and ensures safety while rewarding token holders.

HYVE is the result of over two years worth of time and includes all the important and necessary building blocks of a generalist platform, from decentralized dispute resolution, and trustless escrow between parties to curation of feedback and postings, almost inexistent fees and even self-governing holon-like structures called Hyves.

The 21st century might just be in its infancy but it has nonetheless been filled with monumental technological advances. Innovation has been the norm across all industries, whether we’re talking about AI, VR and AR or Blockchain. We’ve got nanorobots, self-driving cars and a robot dancing on Uptown Funk better than I could ever dream of.

HYVE is a trustless and borderless system governed by meritocracy and peer-to-peer interactions. There have been many technological innovations lately, yes, but few of them focused on organizations and interactions between people.

Our plan is disrupting and decentralizing not only the freelance market but the entire workforce, creating a global collaborative group in the process. HYVE will have no drones, but it should be swarming with worker bees.

HYVE is and will always be a collaborative environment, meant for creative and like-minded people that have a strong desire to discover and innovate, and not a workplace. The quote below encapsulates our sentiment perfectly.

“Nothing is really work unless you would rather be doing something else.” — J.M. Barrie

One of the main downsides of being a creative freelancer is that we aren't usually too concerned with our own finances. Talking about money is something that we should emphasize more as freelancers, since it is crucial to your career and probably the main for performing freelancing work. It's essential 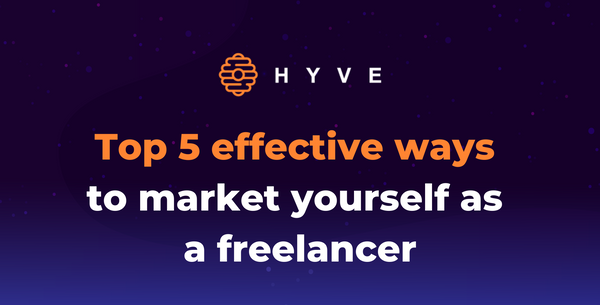 As an increasing number of people are entering the gig economy, we cannot help but wonder how to ensure one`s success when competing with millions of freelancers. Establishing a good marketing strategy will facilitate building a sustainable freelancing business. Like it or not, marketing and selling are essential components 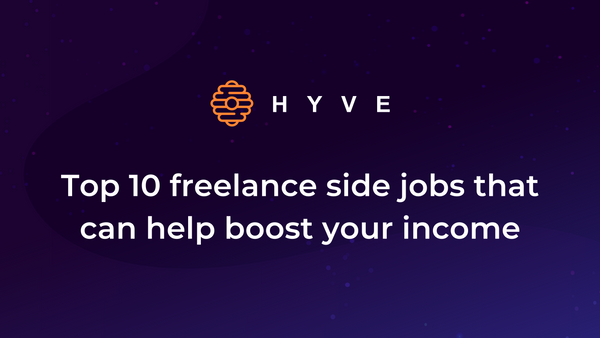 People have constantly sought new ways to boost their income, and with the COVID-19 pandemic, many have become a lot more self conscious about their personal finances. Therefore, side jobs have quickly become one of the most popular ways for people to supplement their day-job income and increase their savings